Carbon monoxide is a colorless, odorless toxic gas that destroys lives. Dubbed as the “Silent Killer”, CO earns its nickname with staggering statistics: on average, more than 400 Americans die from carbon monoxide poisoning unrelated to fire, more than 20,000 are sent to the emergency room, and more than 4,000 are hospitalized yearly (QuickStats: cdc.gov). Carbon monoxide is produced whenever fuel is burned in an environment where there is a limited supply of oxygen, or as a pollutant when hydrocarbon fuels such as natural gas are burned.

CO has an affinity to hemoglobin that is 210 times greater than that of oxygen. Thus, CO binds to hemoglobin much stronger and prevents the cell from respirating and depriving it of oxygen. As hemoglobin transports oxygen from the lungs to the rest of the body, allowing carbon monoxide to occupy the space in which oxygen should be, will cause the body to malfunction (brain damage, nausea, coma, etc...); if oxygen is not supplied in due time, the affected human will die within minutes.

Almost all common households are equipped with carbon monoxide monitors, but vehicles are not. Our team, BioBuilder BoyZ, recognized the vulnerability of drivers and bus commuters to carbon monoxide poisoning and developed a solution. Our product, CO’Later, would detect certain deadly situations and alert the customer when their exhaust pipe is clogged while shoveling, parked inside a garage with the car running, or when you are stranded and running your car for heat. CO’Later is a gel-like, circular pad that attaches to the car’s heating vent, and will notify drivers and passengers of carbon monoxide presence by releasing an odor. Of the 11,547 unintentional CO deaths during 1979 and 1988, 57% were caused by motor-vehicle exhaust; of these, 83% were associated with stationary vehicle. (Cobb) This product has the potential to save thousands of lives from carbon monoxide poisoning that are in all types of passenger vehicles.

Carbon monoxide has been a threat since about the late 1800’s after combustion engines were invented. Since then, deaths due to CO poisoning has exponentially increased. This toxicity is particularly prevalent to hemoglobic animals (both invertebrate and vertebrae) and concentrations above 35 ppm have proved fatal. Many devices have been implemented in hopes of detecting this deadly gas. One example is the household CO alarm. Other tools have also varied to plug in car adapters that emit a colored light in the presence of CO in the car. Although those products are practical tools, our design may provide a more reliable and alarming way to inform the victim of the carbon monoxide presence.

Biological engineering has never been implemented to identify these molecules and doing so allows us to explore a wide array of options to help out customer’s daily lives. The simplicity of CO’ Later allows a user to simply take out the clip-on and apply it to their car or home vent. Our idea was formulated through constant news articles addressing that people were dying to CO poisoning after bomb cyclones, multiple winter storms, and hurricanes rampaged the US and were affecting people's transportation. In hopes of saving many lives, we came up with our idea of CO’ Later.

Our objective was to design a biological device that would bond with CO molecules and emit an odor in the presence of CO and alert the victim to get to safety. The obvious purpose is to limit the amount of accidental fatalities, because CO is a colorless, odorless gas that is difficult to detect. The input would be the CO molecules and the output would be the odor. Our biologically engineered design is described here after.

This is a prototype of the final design. The clip-on would be applicable to a car and/or home vents. Attached to it are gel pads on the clip and front piece that contain the coding sequence CO’Later. The interaction between CO molecules flowing through the vents and passing over the gel pads will result in a stimulation of the bacteria and thus an odor will be released.

In order to further examine and improve our idea, we broke down the biological engineering process through the simplest representation of doing so: an input and output function.

This design (fig. 1.) will turn a cell into a working organism that can produce the output or the desired result. The system would be carbon monoxide detection and its goal is to detect and inform the victim of the presence of Carbon Monoxide in a car or enclosed space (using the CO molecules as an input and anticipating the receival of the desired smell as the output) which is seen in Figure 1. The protein CooA, found naturally in the bacteria Rhodospirillum rubrum is vital to recognizing the input of CO. Without it, the bacteria would be unable to detect any CO molecules or release any scent.

The diagram depicts the input-output function of the system level. Carbon Monoxide molecules are the input and the interaction between the CooA protein and bacterium results in the output of the desired odor.

When Carbon Monoxide molecules enter or interact with bacteria in the clip-on, the interaction with the CO’ Later device begins. The CO’ Later is a combination of the bacterium Rhodospirillum rubrum and the essential protein CooA. The protein’s job is to be present for Carbon Monoxide molecules to bind to it in order to initiate a sensor and stimulate a reporter that will release the banana scent.

As mentioned above, this system’s two key components are the bacterium,  Rhodospirillum rubrum, and the protein, CooA. In addition, we’ve also decided to give the bacteria a noticeable pigment that will indicate its current state (Figure 3). Knowing that in order for our bacteria to be consistently searching for CO, we must provide suitable conditions for it to thrive. However, once the bacteria begin the thrive, they will go ahead and multiply, thus causing our container to eventually explode. Despite all these factors, we have decided to create a prototype with a certain shelf-life to test out our product. If all goes well, we will find a way to keep our bacteria dormant in its container, thus exponentially increasing its shelf-life

This demonstrates how the gene/coding sequence would be inserted to execute the determined commands.

The individual components of any system are referred to as the parts. In this case, they are vital to the functioning of our design. The first part of the design is our constitutive promoter. We decided on this because it will constantly allow our coding sequence to be expressed, which is important as even the slightest margins of error could potentially cost one's life. Thus, having CO’Later constantly available to release scent upon contact with carbon monoxide molecules is essential. Next, the coding sequence, called CO’ Later, is a combination of two important components, the CooA protein, and the bacterium, Rhodospirillum rubrum. After that is the noticeable pigment color, which plays the important role of indicating the effectiveness of the product and if a new clip is required. All of these parts interconnect with one another to make our product come together.

A chronological, visual diagram of the steps taken to create the genetically modified product.

As biotechnology becomes more prevalent, matters that will keep the general public at ease and at safety need to be addressed. This environmentally friendly product will feature recycled plastic and gel-pads consisting of eco-friendly, non-pathogenic bacteria. The non-infectious bacteria will be in a controlled environment inside of the clip-on so that there is never too much or too little of the bacteria at a time. We will be focusing on ease of use, so all it would take to use this clip-on is to slide the clip onto the air vents. Also, making sure that the smell that is released would not trigger any allergic reactions or negative olfactory symptoms is a must in order to ensure a safe and dependable product that only positively affects our lives. We hope to see our design help the public and save countless lives in the near future.

The 2017-2018 Andover High School BioBuilder BoyZ Team would love to thank and acknowledge: 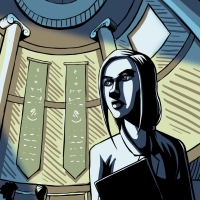